“Coffee is continuously losing quality because of some farmers harvesting immature coffee which ends up rotting. Others use poor post harvest handling methods like drying it on the bare ground, which also negatively impacts on its quality,” he said.

Even consumers are put at risk by immature coffee, which Tumwizere says can become “hazardous”.

“When farmers pick immature coffee, they first keep it in sacks and hence it ends up molding. This develops a toxic acid which is hazardous to consumers because it causes cancer,” he said.

He further noted that such poor harvesting practices threaten to undermine the progress that has been made in promoting coffee farming in the region.

“People in the Rwenzori region have responded positively to planting more coffee but there are some farmers who are not adhering to good harvesting standards by harvesting immature coffee,” he said.

Traders involved in buying immature coffee tend to lure farmers into selling to them by offering more money for it than they would pay at harvest time when mature coffee floods the market.

According to locals, traders buy a basin of immature coffee at Shs 10,000, which Tumwizere said is more than what they would get for coffee that is ready for harvest.

In response, UCDA has intensified efforts to curb the vice by threatening to arrest farmers involved in the trade.

“We shall start arresting any farmer that we find harvesting immature coffee because it affects the quality of coffee on the market which not only affects the farmer but also the country’s exports” he said.

On Wednesday this week, Tumwizere impounded 26 sacks of immature coffee and arrested two workers accused of engaging in the illicit trade at a coffee store in Kiburara village, Hakibale Sub County, in Kabarole district.

The operation, which was conducted by Tumwizere and an official from the Operation Wealth Creation (OWC), followed a tip off from locals that some traders were buying immature coffee within their village. The traders were apprehended and handed over to the police, and their coffee impounded.

In 2017, during an operation OWC officials impounded more than 500kgs of green coffee berries from traders in Mitandi Kyamukube town council, now part of Bunyangabu district and arrested one of the traders.

Richard Waako, the in-charge, defence, in Kiburara village where the culprits were netted, said the two individuals had been arrested twice before over the same practice (dealing in immature coffee), but they have persisted in the illicit trade.

Buy your copy of thecooperator magazine from one of our country- wide vending points or an e-copy on emag.thecooperator.news

The post UCDA cracks down on immature coffee trade appeared first on The Cooperator News.

In a bid to boost agricultural production, government through Operation Wealth Creation (OWC) has donated three tractors to three cooperative societies in Kasese district. The donation comes at a time when the Ministry of Agriculture, Animal Industry and Fisheries (MAAIF) is prioritizing agricultural mechanization.

Handing over the tractors, Hanny Turyahebwa, the Chief Administrative Officer (CAO) Kasese district lauded government for prioritizing agricultural mechanization. Turyahebwa has since been transferred to Ntungamo district in the same capacity.

Gideon Ntabose Sanyu, the Vice Chairman Kasese district said that once properly utilized, the tractors will help farmers in the beneficiary cooperatives to boost their production and consequently household incomes.

“We carried out a needs assessment in all cooperative societies during the time Gen. Salim Saleh [Chief Coordinator, Operation Wealth Creation] was in the district. We found out that ploughing was still a major problem to our farmers, and these three cooperatives had the capacity to increase their production if supported with tractors,” Ntabose said.

The Kasese Resident District Commissioner (RDC), Lt Joe Walusimbi implored leaders of the three cooperatives to ensure that all farmers have equal access to the tractors. “Don’t use these tractors on things that are outside the Momorandum of Understanding, but rather stick to the intended purpose for increased production,” Walusimbi cautioned.

The post Government donates tractors to cooperatives in Kasese appeared first on The Cooperator News. 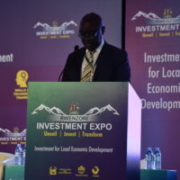 The Minister of Agriculture, Animal Industry and Fisheries (MAAIF), Vincent Bamulangaki Ssempija has appealed to farmers in Rwenzori sub region to embrace agricultural mechanisation as one of improving production.

This is the reason why we partnered with National Agriculture Advisory Services to give out tractors to farmer groups” Ssempija said.

Speaking at the Rwenzori Investment Expo at Mountains of the Moon University in Fort Portal town on Thursday, Ssempija revealed that government plans to establish regional mechanisation centres across the country to offer technical assistance to farmer groups.

Under the theme, “Investment for local economic development,” the Rwenzori Expo, was organised by Operations Wealth Creation (OWC) in conjunction with Uganda Investment Authority (UAI) among other stakeholders. The expo was meant to showcase investment opportunities in the Rwenzori sub region.

Gen. Salim Saleh, the Chief Coordinator OWC in his speech read for him by his deputy Lt Gen. Charles Angina noted an improvement in agricultural production in the country due to government initiatives.

“Generally, the agricultural sector has registered improved growth rates over the last four years averaging 3.0 percent per annum. The performance across the prioritized commodities has been generally good with significant improvements observed in key strategic and food security commodities” Saleh said.

He said the expo will go a long way in opening up Rwenzori sub region for investment. “As you may all already know, this region has significant investment opportunities in agriculture, tourism, mining etc. This expo will trigger investment in the region by attracting both local and international investors by providing a forum private investors, local governments, central government and other development partners to network” he said.

Emmanuel Mutungi, the chairman Kyegegwa Fruit Farmers Association said the expo offered him an opportunity to learn from fellow farmers. “I have interacted with other farmers, shared knowledge, experiences and challenges which may help us [the association] in our daily farming activities” Mutungi said.

Kyegegwa Fruit Farmers Association is one of the groups that received a tractor to boost their production. The association grows and makes juice from watermelons, mangoes, pineapples among others. Since 2014, Operation Wealth Creation has been instrumental in supporting farmers with seeds and other farm inputs to boost production.

The post Ssempija roots for Agricultural Mechanisation appeared first on The Cooperator News.

The Uganda Police Savings Association Limited (PSAL) has registered a remarkable growth in its savings and asset base. PSAL Chairman, Assistant Inspector General of Police (AIGP) Edward Ochom told theCooperator that the association’s net worth is now Shs 16bn and a loan portfolio of more than Shs 300 million.

Ochom said due to increased savings, PSAL has acquired land and constructed estates in Kansanga, Gayaza and soon in Bwebajja along Entebbe Road. “Many of our members have not only educated their children and constructed houses due to savings and loans from PSAL,” Ochom said.

PSAL was formed in 1989 as a welfare association to supplement the earnings of police officers. “We all know that our police officers earn little money, yet they have children to look after and also need to develop. It is from these savings that majority of them have managed to educate their children up to university and also buy land and construct houses,” said Ochom.

Over the years, PSAL has endured many challenges that nearly closed its closure. In 1990s, PSAL had more than 14,000 members. However, the membership dropped after the Justice Ssebutinde led Commission of Inquiry that unearthed scandals in the Force. Ssebutinde’s Commission found that majority of the members mainly the low ranking officers were un able to acquire loans, in addition to embezzlement of funds by leaders.

“We had started well in the 1990s. The saving scheme had more than 14,000 members but after some issues, the number reduced to 700. I am glad that now we are rising in numbers once again. We are now 2,271 registered members,” Ochom told theCooperator.

The Force currently has two parallel Savings schemes – PSAL and the Exodus SACCO. The Exodus SACCO that boosts of 27,000 members was formed by the former Inspector General of Police General Kale Kayihura in 2007.

In January this year, PSAL held the Annual General Meeting (AGM) at Nsambya Sharing Hall, Kampala that coincided with its 30th anniversary. Speaking at the event, Inspector General of Police (IGP) Martins Okoth Ochola hailed the board of directors for steering the association out of its past troubles.

“I would like to thank the board of directors for the support and dedication in advancing the cause of our officers. You are not only the backbone of savings in the force but also its heart and soul,” Ochola said.

Ochola asked the leadership to stick to the association’s core values of integrity, transparency, and accountability. “As Uganda Police leadership, we are delighted to be part of this Annual General Meeting which reflects in a practical way, how police officers can organize ourselves in a proper manner to financially benefit from one another and help to make a difference in our general welfare,” Ochola, who is also a member of PSAL said.

He added, “We support the many positive contributions and initiatives undertaken by PSAL and other saving schemes which are aimed at helping the Police officers and their families in raising their standards of living,”.