You are here: Home1 / THE UHURU THINK TANK OVERVIEW
Our Agenda

OUR AGENDA FOR CHANGE

The Uhuru Institute for Social Development is about rethinking development models and proposing practical alternatives through research, innovations, pilot testing and field trials. We believe that in today’s highly market driven economies, increasing inequality is relegating the majority into further vulnerability to poverty, hunger and disease. We think that for democracy, human rights and dignity to make meaning in everyone’s day to day life, all household income and wellbeing must improve in society. This can only be achieved through, enabling better people organising to create wealth and in so doing increase their stake in all affairs of the nation. Consequently, we are always innovating and testing ideas that shape decisions for equitable, inclusive, people centred development. In our view the cooperative business model, is a tested practical option to achieve equitable and inclusive development. Ours is about creating wealth to protect human rights and human dignity, and expanding our outreach to include more people to this journey of hope.

An Overview of Uganda

AN OVERVIEW OF UGANDA’S NATIONAL CONTEXT 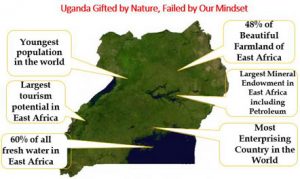 Uganda is a country with immense natural endowment. The country hosts 60% of all the fresh water in East Africa, comprising 45% or 31,000 km2 of the Lake Victoria, rivers, and swamps. The country has a rich tropical rainforest in the central and southern regions, lush Savannah vegetation in the northern plains, and a temperate alpine climate in the Rwenzori and Elgon Mountains to the western and eastern fringes, respectively and massive tourism potential across the entire country. Recent discoveries of vast varieties of commercial value mineral deposits and an estimated 6 billion barrels of oil reserve have opened new frontiers for economic prosperity in the coming decades. Uganda is also endowed with abundant thermal, solar, hydro, and wind power potential. The country is also a potential food basket for East Africa, with over 48% of the arable land of the region. Present statistics indicate that 78.6% of the population is below the age of 30, a necessary intellect, energy, and passion for socio-economic and democratic transformation. 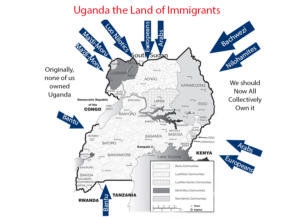 About 450AD to 1890sAD various ethnic communities migrated from different parts of Africa into the Great Lakes region of central African in search of water and pastures for livestock, fresh water and crop farmland, healthy environment and peaceful environment. Uganda is the interaction ad integration point from which the Luo and Ngitunga people coming from Abyssinian Mountains and along the Nile Valley, met the Bantu peoples coming in from central Africa and southern Africa. This integration occurred with the formation of Bunyoro Kitara Empire stretching al the way from eastern DRC to western Kenya, was largely disrupted by the coming of the Arab Muslim and European Christian missionaries and the final establishment of colonial administration in 1900.  It is in the interests of all Ugandans rethink this integration and build a united prosperous, peaceful country with happy people. 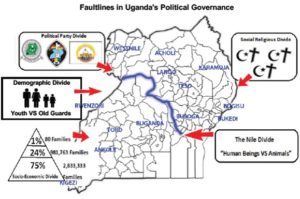 Over the years, recurrent political conflict has undermined socio-economic development, weakened institutions of democratic governance, and alienated citizens from taking the central role in socioeconomic development and nation-building. Although the 1995 Constitution renewed some hope, in reality, the country did not transform the exploitative colonial state into truly citizen-centred democratic institution promoting national solidarity, respecting everyone’s dignity, and opening opportunities for prosperity to every Ugandan. Many Ugandans lack information, due to deliberate hiding of information and or through the poor reading culture; misinformation through downplaying truth and passing blame onto the countries history, enabling the present to abuse power with impunity; and disinformation, where truth is turned on its head and made to look like falsehood. These vices are responsible for the largely negative mindset of many Ugandans that is disempowering, increasing poverty, and giving free reign to impunity. 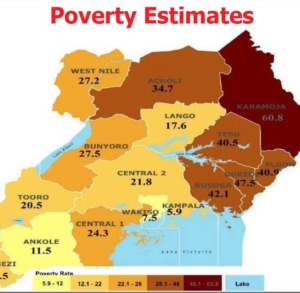 The last three decades of poorly guided economic liberalization and privatization policies left the population disempowered, disorganized, and impoverished. This created serious inequality with a tiny group of wealthy politically connected elite monopolizing, social, economic and political space, while a majority of Ugandans either in abject poverty or highly vulnerable to sliding into poverty. Eventually, this has created a dysfunctional social security system, entrenched elite political patronage, legitimized vote-buying, and turned corruption into societal indicators of success and a license to privileges. Moreover, the last time the country had a clear locally driven development plan was the Five Year Development Plan 1966-1971 dubbed “Work for Progress”, and second Five Year Development Plan, Rehabilitation and Reconstruction 1981-1985. From this point onwards, most policy decision making were largely driven by donor funded short term projects lacking in national priorities for achieving a dream future. It was only until the year 2009, when the National Planning Authority was established, that the country produced the Vision 2040, the first 2009-2014 and now second five-year development plan 2015-2020. 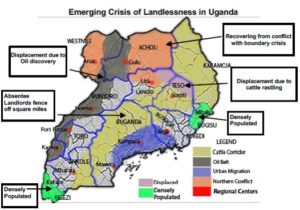 At a time when the country is drowned in socioeconomic stagnation and constitutional bickering there is no sober team objectively conducting strategic non-partisan development policy analysis and alternative political economy thought options that can inform the public discourse and provides hope to the country beyond the bipartisan divide. For the country to strategically position itself in the competitive global market there is urgent need for an independent Think Tank dubbed “the People’s Space” that conducts research studies, produce think pieces, discussion papers and facilitate public dialogues on topical issues across the country. The People’s Space produces independent development alternative ideas and policy analysis to inform policy decision and an alternative political economy thought on the future of the country’s economic development and democratic governance. 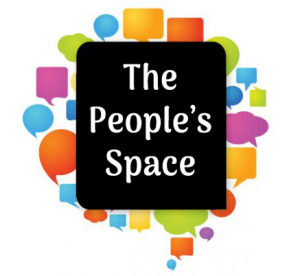 MORE ABOUT THE PEOPLE’S SPACE

We stand for an equitable society, led by a developmental state, run alongside the principles of a social market economy that puts the citizen at the center of an inclusive, cooperative, and accountable system. We are inspired by the African “Ubuntu” philosophy (I am because you are) to build a people centered development paradigm.

Youth Focus: Because Uganda in particular and Africa in general is demographically very young the Peoples Space deliberately recruits youth leaders who are willing to learn and grow in ideology and building a new socioeconomic development policy and democracy practice.

The Peoples Space think tank is managed by the secretariat staff team contracted by The Uhuru Institute for Social Development.

Our research is driven by our ideological position that development must be equitable, all inclusive and people centered. And that to achieve this a deliberate strategy is necessary for a fair sharing of national resources, through acquiring employable skills, becoming competitive in product and services markets, and together contributing to the national tax base to finance social services for the public good. We research on ways to improve efficiency of citizen formations to produce wealth, improve personal and household income, and promote community well-being.

In the last five years we have conducted two specific studies on the status of cooperatives, a study on the risk of election violence in Uganda. Our choice of research area is informed by the concerns and opportunities cooperatives and community organisations are reporting and buy what can be done to make them more successful. We are also informed by issues emerging from think pieces, discussion papers and reports from regular public dialogues that we host. We are building the Uhuru Think Tank into the research and knowledge hub for citizen centred development and socioeconomic transformation.

Cooperatives and Embedded Neoliberalism in Uganda

Debating Gender in the revival of cooperatives in Uganda

How and Why Cooperatives survived UCSCU Paper

The False Start of Cooperative Societies in Uganda