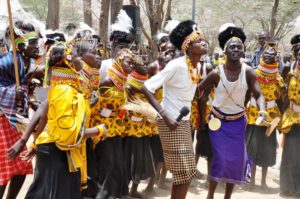 Pastoralists from Karamoja and Turkana have called on the governments of Kenya and Uganda to establish a regional beef factory at the border between the two communities.

The demand, made on Monday last week at a cross border peace meeting between the Turkana and Karimojong held in Kenya’s Loima district, re-echoed a recurring plea by leaders of the pastoralist communities in every joint meeting they have held in the recent past.

They say the proposed factory will enable them add value to their products and improve on their welfare.

“Right now we only eat the meat and drink milk from our livestock; but if we had a factory, we could pack meat and process leather for sale, which would improve our household incomes,” Timothy Lokuruka, a Turkana elder from Loima District in Kenya said.

Mr. Mathew Mudong, a Karimojong pastoralist from Moroto district agreed, adding that such a facility would allow the Karimojong and their Turkana neighbours to benefit from the East African regional market.

The Karimojong and Turkana peoples have traditionally been fierce rivals, often clashing over water and pasture resources in addition to engaging in frequent cattle raids and rustling expeditions.

Recently, however, efforts to promote peace between the communities have started to bear fruit, a development that Peter Loputhnyang, another Karimojong elder, finds exciting.

“We have decided to stop killing each other and we are very excited by the current peace that has united the Turkana and the Karimojong,” he said. “We are now demanding for joint services for our communities from both governments (Uganda and Kenya).”

Others like Imana Icor, the Turkana Peace Ambassador, called for the establishment of supporting facilities such a veterinary school and meteorological centre within the community.

“In addition to the beef factory, we need a veterinary school for our children to study animals’ medicines, and a facility for weather forecast given the impact climate changes wan have on livestock,” he opined.

John Byabagambi, Uganda’s Minister for Karamoja affairs assured the pastoralists that the two governments would address their demand. “We shall forward your request to the highest authorities so that action can be taken,” he said.

During his 2016 presidential election campaign, President Museveni pledged to set up beef and cement factories in Karamoja, a promise that is yet to materialise.

Once bitter rivals, the Turkana and Karimojong are on better terms now and even share grazing resources. Currently, more than 70,000 Turkana pastoralists with about 200,000 heads of cattle, donkeys, camels, and goats are grazing together with their Karimojong counterparts in the areas of Moroto, Kotido and Kaabong after fleeing from a drought that scorched their pastures and dried up water sources back home in Kenya.

Want to join the discussion?
Feel free to contribute!